Once the hunting grounds of several tribes of Native American Indians Ogdensburg was the first white settlement in the wilderness that became northern New York State. On November 21, 1748 Abbe Francis Piquet, a Sulpician missionary, arrived in the area from Canada. He established a fort and mission here, naming the fort for the Feast of the Presentation of the Blessed Virgin Mary, the day he arrived in the area. Located at the confluence of the St. Lawrence and Oswegatchie Rivers, the fort was known as Fort La Presentation. The fort served as church, school, trading post, Indian village, and citadel. The first Mass at the site (and the first in northern New York) was celebrated by Abbe Piquet on June 1, 1749.

In 1760, under British Rule, the fort was renamed Fort Oswegatchie, and became a busy stopping place for traveling soldiers. Under provisions of Jay’s Treaty, the area was turned over to Nathan Ford, agent for landowner Col. Samuel Ogden in 1796. The area continued to flourish as settlers from Europe, Canada, New England, and other parts of the world found their way here. The settlement later became known as Ogdensburgh, named after Col. Ogden. Over the course of the next 16 years Ogdensburgh became an important border community, and was seen as a strategic location during the War of 1812. In fact, Ogdensburg was attacked and suffered severely at the hands of the British on February 22, 1813.

Ogdensburg was incorporated as the first village in St. Lawrence County in 1817. It grew to be a busy shipping center for river traffic, and greeted its first train in 1850. After the Civil War, growth continued. Attracting people from far and wide, we became the “New York City of the North.” At that time the community was known as “the Maple City” and a city form of government was adopted on April 27, 1868. The spelling of the name Ogdensburgh was then changed to drop the ‘h’, and is known today as Ogdensburg. Some of the important names in Ogdensburg’s history have been recalled in naming the streets in the city, including Ford Street, Ford Avenue, Ogden Avenue, Jay Street and Piquet Drive. 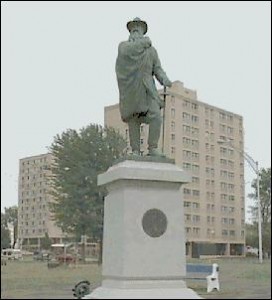 This statue standing guard over the Greenbelt Area was erected in 1913 to honor the prominent Civil War hero Brevet Major General Newton Martin Curtis, born in 1835 and died in 1910.

In July 2014 and after 8 years of retirement, Bruce and Bonnie LaRose, the original owners, builders and innkeepers for over 20 years along with their grandson, David, have returned to be the newest owners of the Stonefence Resort Motel.  “We found that we missed the people and the business more than we had thought,” Mr. LaRose said.  “Many of our customers became like family, staying with us whenever they were in the area.” “We Became a destination for many and hope to restore our facilities and trust to where it once again exceeds our customers’ expectations as a Three Diamond Triple AAA Property.  Our grandson, David, is a people person.  He has a nice way with our guests.  People like David and we are confident he will be good innkeeper.”